Just been trying out the names and etched plates to rename and renumber a Dapol 7mm Terrier that had been Brighton with the gold medal lettering. I used a curved scalpel blade, very gently, to scrape away the wording and name off the existing tank side and removed the plastic numberplate by just putting the tip of the blade under it and twisting very slightly.

I then applied a very thin coat of Vallejo 70.510 gloss varnish using a broad brush and waited for it to dry - about 20 minutes.

Next was applying the white underprint layer, to ensure there is white in the final name and to allow the coloured toner to show as if printing on white paper - which is what the printer is designed to do. 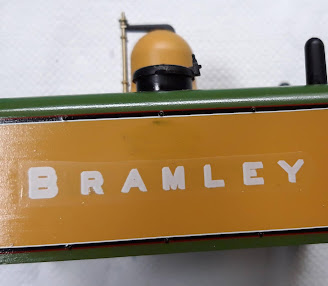 The next time I do this, I shall experiment with Microsol or Microfix decal solutions to see if the edge of the transfer can be softened further. I will also try another type of gloss varnish to see if it makes the carrier film disappear better. The white was allowed to dry - again about 20 minutes. I did the other side whilst waiting and filed and smoothed the tabs off and painted the etched plates a dark blue and used a black sharpie marker to put the lettering in before a rub over with abrasive paper to leave them as per the photo below.

Then another thin coat of the gloss varnish over the white to seal that, let it dry before then applying the coloured part of the name. Another thin coat over the dried coloured name and a tiny drop of superglue for the etched number and works plate and I am ready to reassemble the parts for the photo. I am correcting the position of the cab gauges and a few other detail improvements also. I will post a photo when I have completed all those, later.

The lighting that the photo is taken in really affects how the IEG looks doesn't it!

I can supply any 7mm name for a Terrier as well as the etched plates as shown here and below. £18 including postage. 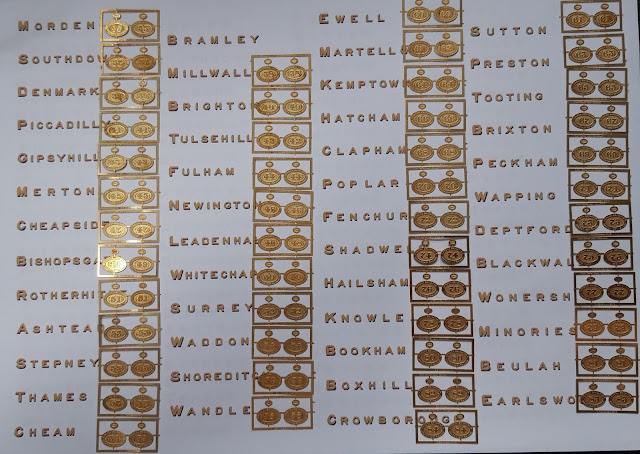 Above are the names just printed on white paper with the etched number and works plate alongside. I do have another for 36 Bramley if anyone wants one by the way.

Now that I have got the names sorted for 7mm I am going to start development work on the Stroudley lining and lettering for 4mm, which I know a few people are waiting for! The number and works plates are all available already, as they are for any 4mm loco with numberplates and the works plates for the I3 class are also available as per the October 2019 post